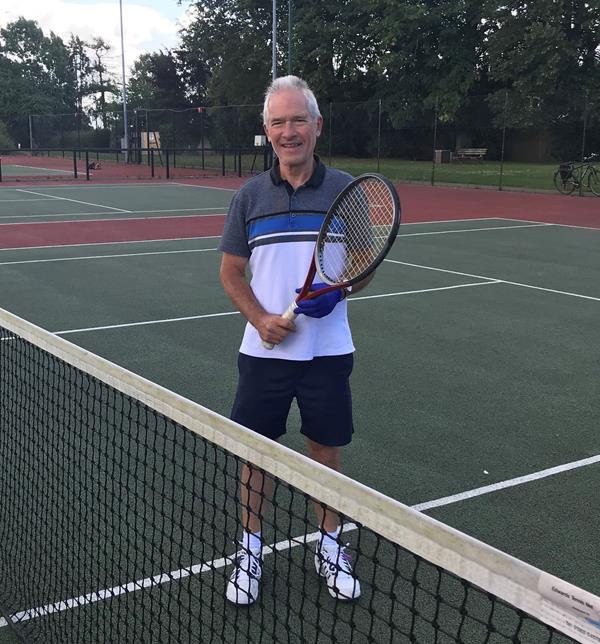 My mother was the tennis player in my family.  She had been captain of her college team in the USA (back in 1938) and she introduced me to tennis aged about 8, but I only played outdoors in school holidays when the weather was OK and was slow to improve.  I played a bit of social tennis at university but after that I lived for several years in Yemen where the nearest court was 200 miles away, and subsequently in a small town in Tanzania with a court 60 miles away, where I did manage to play once a month.  Basically I wasn’t much good, although I loved playing.  Then came Oman …..

For three years in the 1980s I worked in Salalah, the capital town of the southern Dhofar province of Oman.  The weather on the coast was perfect for 10 months of the year and the Holiday Inn courts were only 2 miles away and had floodlights!  Being a fairly traditional Muslim town, few women played tennis at all and those that did were almost all Europeans.  I proposed running a singles box ladder open to men and women, like our NOLTC ladder, and the hotel manager was in favour until Hisham, an Egyptian player I knew, objected to women playing against men.  Fortunately his wife Nora worked in our office as translator and decided she wanted to play in the ladder herself, so she overruled him.

My most memorable victory was there in Oman with my wife Jane.  In the final of the Salalah Open Mixed Doubles we met none other than Hisham and Nora.  They had won it the last 3 years in a row but Jane and I had a lot of support among the spectators and we managed to keep our cool during Hisham’s antics.  Near the end of the first set I hit a deep ball which Hisham caught 6 feet behind the baseline and the referee gave us the point, whereupon Hisham went ballistic and walked off the court threatening to abandon the match.  I remonstrated with Srinivas, our umpire (after all this was just small-time Salalah) and he finally agreed to issue a warning.  At one set all Hisham and Nora disappeared for ten minutes and came back after having adrenalin injections.  But Jane and I managed to take the final set and the winners’ plastic trophy.  I also got another plastic trophy as runner up in the Men’s Doubles.

I joined NOLTC in 1991 when we moved from London to Oxford with our 4 children.  I was looking for a club with a singles tennis ladder and that made the choice of clubs simple.  In 2003 I took over running the Singles Box Ladder and first one I prepared was in June, with 55 players.  Some 15 years ago I played quite often with the summer Mixed Doubles friendlies, then run by Pat Prosser and usually I partnered either Pat or Maggie Maguire.  About 8 years ago I joined the men’s winter E team aka summer F team and am still trying to improve my doubles tactics.

What does your role at the club involve?

I have never been an official committee member.  My role has been running Box ladders only.  I was awarded the Christopher Butt Memorial Trophy for running the ladder a few years ago. I play in it, too, and I think my greatest tennis achievement at NOLTC was to defeat Alvaro Romero Muñoz (only once) two years ago in the singles box ladder.  We played on grass and it went to a 12-10 tie break.

I think the club offers exceptional, organised opportunities for players to meet and play with others, whether through social tennis at club mornings/evenings or playing in the ladder or being in a team squad.  No doubt this is largely because we have a lot of members and good participation.

These days my main sports are tennis and, when I get the chance, some dinghy sailing.  I used to play squash for 6 months of the year and tennis for 6 months but now I play tennis all year round.  I love skiing but I haven’t been on the mountains for 8 years now, although last winter I tried the Milton Keynes snowdome and found I hadn’t forgotten how to do it, so maybe I will join some fellow NOLTC members skiing sometime.

I think my favourite sporting moment goes back to watching the 1966 World Cup Final with my parents on our black and white TV.  We didn’t usually watch football in our family but that was special!  The next year in 1967 my parents bought our first colour TV.  My mother set the deadline for delivery: it had to be in time to watch Wimbledon on the Beeb.

The last film we saw in a cinema was the South Korean ‘Parasite’, at the Phoenix in February.  I really enjoyed it and these days I usually look for quirky foreign films by preference but I think one of the greatest films I have seen was ‘2001: A Space Odyssey’ released in 1969.  I saw that film on the big screen 5 times during the same year – it pushed special effects technology to the limit at that time, without computer graphics of course. I was 17 then and in awe of director Stanley Kubrik, who was the creative genius behind it.

If you were a guest on Saturday Kitchen, what would be your food heaven and food hell?

I love Basmati rice cooked Middle Eastern style, which I learned to do in Yemen where those who could afford it (imported) would offer rice-based dishes to their guests.  My idea of hell is eating Spam, a dish I hated at school meals but which we had to finish or face punishment at my primary school.

With two school friends I saw Bob Dylan live at the Isle of Wight festival 1969, which was an amazing experience.  He was on Saturday night and we had planned to stay on until the end of Sunday but we only had basic sleeping bags so when it rained overnight we got soaked and miserable, and headed back to the mainland at dawn on the first ferry from Yarmouth to Lymington.  I had a much better experience at Glastonbury when I went with Jane in 1984 and had a tiny tent – that cemented our then new relationship!

What bones have you broken?

I have broken my leg twice skiing (tibia and fibula) but that was years ago and glad to say no more broken bones since then.  We live in hope!

It’s hard to be specific but I hope we continue with sufficient membership to be solvent and enable all members to get on court as often as possible.  It is great to see so much activity with so many private court bookings under present circumstances.  All the gaps created by reduction of organised tennis (social, team practice, etc) have been well used!