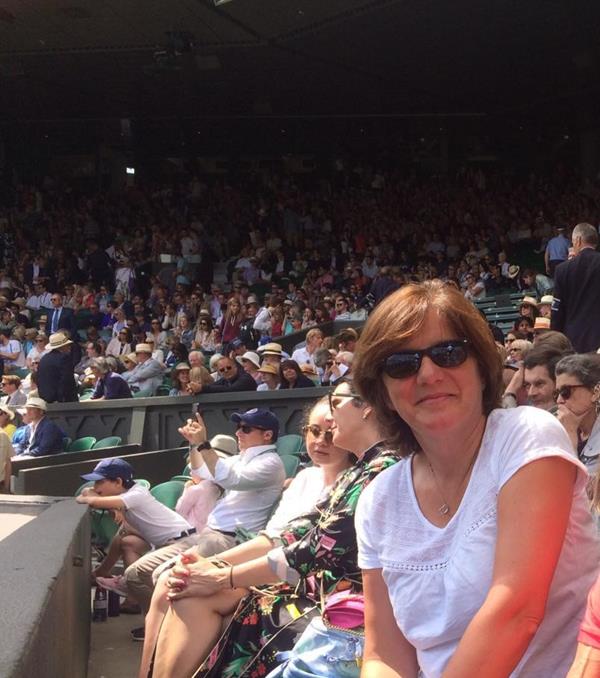 I started playing tennis when I was a child with my family on the Brunel University tennis courts where my father worked. It was just a bit of fun. It was when I moved to Oxford for a job that I took up the sport more seriously, I joined North Oxford Tennis Club in 1988 and have been a member since then. I am currently Chairman of the committee and this is my second time in the role. This stint started in 2016. One might say I’m a gluten for punishment! I am also currently Captain of the Ladies B team and the Mixed C team. I have won, with my great doubles partners, the Mixed Club Championships and the Ladies Doubles Championships a number of times over the years. I even met my husband Neale, through tennis, with precision timing it was as I was standing down from first being Chairman 14 years ago.

My role on the committee involves a number of things – overseeing running of the tennis club (which is a long list in itself), liaising with our site partners, our landlords, the LTA, Oxfordshire Tennis etc etc. More recently, also having to do other roles that we have not been able to fill.

The unsung heroes – they know who they are. Those people who step forward and get things done without being asked. Also our coaching team, and our great facilities.

I enjoy watching rugby – liviing with a Kiwi, we watch the Southern Hemisphere as well as the Northern Hemisphere games and that can mean a lot of rugby, primarily the Internationals. I find golf relatively boring until the Ryder Cup, and then I sit glued to it! Most recently I watched my 13-year-old nephew play hockey in a tournament in Cheltenham just before the lockdown and that was good fun, actually cheering someone you know on the pitch!

What was your favourite film as a child?

Probably the Sound of Music (as I can’t really remember any of the others I saw). I saw for the first time when I was 4 in Seaford, whilst on holiday with my parents and sister. I still watch it today.

Interestingly, I have got more into cooking during the lockdown and am using new recipes. This has been helped by the fact that I get a veggie box each week and have to find things to cook for vegetables that I don’t usually buy! However, one of my most-liked things I make is a courgette cake. This came about as a result of having too many courgettes in the garden several years ago and having to come up with creative ways to use them.

It was Celine Dion, but should I admit to that? The worst part of it was that she only sang for 20 minutes and then had to leave the stage as she had a sore throat. We had driven miles to get there!

What was your most memorable holiday?

That is tough. I have great childhood memories of wonderful holidays – from the Scottish Highlands, to the Bay of Islands in New Zealand. I think, though, I would say it was sailing around the island of Minorca.  Neale and I rented a boat and took a week to sail around the island several years ago.  It was beautiful, tranquil and restful.

I want NOLTC to be a vibrant, all inclusive successful tennis club that builds on what we have already, great people, great facilities and a membership that wants to continue to evolve – whether that is looking at new surfaces, new types of tennis (padel tennis) etc.