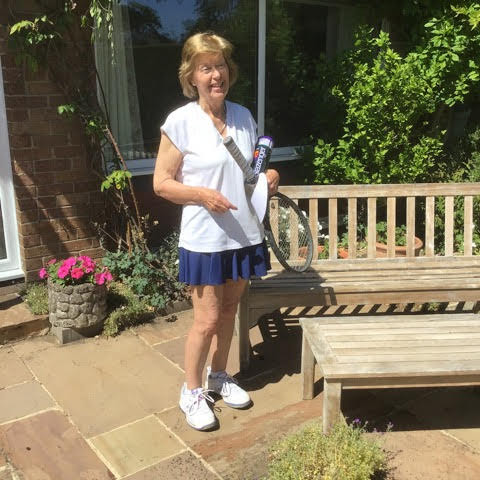 My tennis life started at school.  I always loved playing sport and tennis and netball were a big part of my life growing up.  I moved to the United States in my early twenties and, apart from playing occasionally in the summers, I didn’t play much while I was there.  I moved back to England eight years later with husband and children.  We lived in Holland Park and our flat overlooked Holland Park Tennis Club.  I joined the club and started playing again.  It was a small, very friendly club and I happily played social tennis there for five years.  Our next move was to Northamptonshire where I played ladies’ daytime tennis (can’t remember the name of the club) for a couple of years.  Then it was Oxford in 1982/3 and I joined NOLTC.

I played at evening club sessions for a while but then let my membership lapse, although I did continue to play tennis with friends.  I rejoined a number of years later when I had given up working and was keen to play during the day.  However, I was surprised that there was no organised daytime club sessions.  I met Ann Stearns and mixed in a group on a Tuesday.  That was the beginning of the Tuesday Club Morning which has become such a well supported and enjoyable part of NOLTC life.

I should mention that I organised and captained the mid-week mixed doubles matches against other clubs for several years.  They were a lot of fun but it did become more and more difficult to find members who wanted to turn out on a Wednesday evening,  I was also a member of Catherine’s D squad, as it was then.

My role on the committee is deputy to Janet Thomas as Welfare Officer. I also represent social players, and I am always willing to help with necessary jobs that need to be done i.e dogsbody!

The good thing about NOLTC is accessibility to play i.e team play, club sessions morning and evening and court booking for re-arranged play.

I enjoy watching most sports, that is with the exception of soccer!

My favourite is watching Chitty Chitty Bang Bang with my grandchildren.

The only gigs I go to are tennis tournaments!  I’ve been lucky enough to go to the Miami Open on a few occasions.  I also went to the US Open in the early days of Andy Murray and saw him hit a couple of balls before the rain came down and the day was rained off.  Now I enjoy Eastbourne, Queens but not so much Wimbledon as it has become so crowded.

I’’m not much of a meat eater but love all fruit and veg.  However, I must say I make a pretty good apple cake.

My wish for NOLTC is that remains such a nice, friendly club.  I would also like to see it develop with more all weather courts and improvements to the clubhouse.