Thanks to Allan for this match report from our Under 14 Team Tennis boys visit to Cardiff in the Premier League. 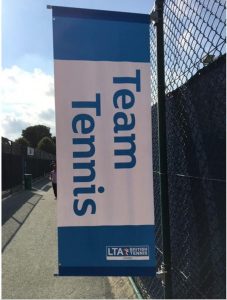 On Sunday April 7th, four players from North Oxford LTC made their way to Cardiff to play a Premier League match against David Lloyd (Cardiff). The Under 14 team comprised of (in order of ranking): Bobby, Arthur, Monty, and Seth.

The team arrived early for their warm up after having been on the road for over two hours. Nerves were beginning to show as memories from the last emotionally-charged and event-packed match against Cardiff were recalled. The last encounter’s loss had the team eager for revenge. The match was held on three of the seven indoor courts of a bustling club (in fact, the team was lucky to get a chance to hit a few pre-match balls on them!). Due to the number of courts, the order of play was pre-determined: the first round saw the first two singles players (Bobby & Arthur) play their singles matches alongside the “number two” doubles pair (Monty & Seth). The colourful and tricky indoor courts took a while for our players to get used to; however, once Bobby and Arthur realised how the ball reacted to the surface and how their movement was affected, they were able to adjust themselves and settle into a rhythm and both came out victorious. Bobby won at the top spot against a strong opponent 6/4, 7/6(4) whilst Arthur made fine work of his opposite number 6/3, 6/1. Unfortunately, Monty & Seth weren’t able to combine well in their doubles match and went down to a formidable pair 2/6, 2/6.

The second round saw Monty and Seth take the stage for their single rubbers – both had retribution on their minds and focused on digging deep after their first round doubles loss. It turned out to be Seth who would utterly annihilate his opposite man 6/0, 6/1 in a one-sided affair; his hard work ethic and strong-minded approach proved simply too much for his opponent. Unfortunately, Monty found it hard to adjust to the brightly coloured indoor carpet courts of David Lloyd Cardiff and was unable to turn his fortunes around from the doubles earlier – he lost his match 2/6, 1/6. Meanwhile, the dynamic duo of Bobby & Arthur took to battle against Cardiff’s finest. The match proved to be a nail-biter: they clinched the first set 7/5 after a lengthy exchange, then lost the following set 4/6 to see the match go into a deciding third set match tie-break (first to ten points). Their mid-match drop in intensity was no no longer a factor in the deciding tie-break, as they went on to dominate their opponents 10-3.

All in all, the team was exemplary both on and off the court: It was a pleasure for me to be able to be there to witness their performance and behaviour as their Captain. With their focus and fighting spirit, this team can go very far and ultimately do North Oxford LTC very proud!. A special mention should also go to Alison & Bob for driving the team back & forth and for their continued support throughout. A job well done team!