Firstly thanks to those club members who made it down to the magnificent West Hants Club in Bournemouth last weekend where the sun blessed some brilliant tennis over 3 days!

Our team of Jack Rooney, Jon Maskens, Jeff Hunter, Ben Calnan, Cameron Price and Joe Cartledge were unlucky to draw the no 2 seeds and eventual winners David Lloyd Raynes Park in the first round. You can see all the results using this link but the highlights were Ben getting set points against Jamie Baker (ex Davis Cup and BBC commentator), and Cameron Price getting more games off Liam Brody (ATP world ranking inside 200) than did semi finalist Ollie Golding (also world ranked c 800). Ben and Jon won a great doubles in a 3rd set tie break to restore some credit to the score line.

We then played Northern (Manchester) in the consolation round where our guys played their hearts out getting back to 3 all, winning both doubles after going behind 1-3 after the singles. Then came the tie break shoot out which went to the death after the singles finished one a piece. We then narrowly lost the doubles 7-10!

Still this means North Oxford finished as one of the top 8 club teams in the UK – not a bad effort …! 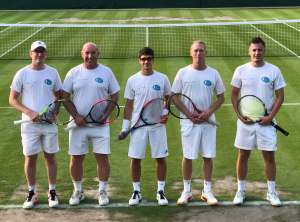 What benefit to the club you ask yourself?  Firstly, we should be proud as a club to be playing in such esteemed company which also gives us recognition when it comes to appealing for funding whether from sponsors or via LTA grants and loans. Secondly the playing standard on show should be an inspiration to other players, particularly aspiring juniors.