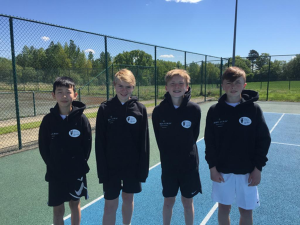 On Sunday May 12th, the North Oxford LTC Under 14 Premier League team embarked on another long journey to take on The Shrewsbury Club. The team comprised of (in order of ranking): Bobby Hornby, Arthur Manson. Xing Chen Cao and Monty Bowles. The team arrived promptly for a thorough warm up on hard outdoor (macadam) courts after having been on the road for almost two hours. Our players prepared well and were looking forward to the contest despite hearing that their opposition were fielding a strong number one player ranked 59 nationally.

The sunny weather almost took its toll on our players – it certainly affected the way we played (some for the better, whilst others struggled). The heat combined with the slow macadam courts resulted in our players needing to be more patient and expect lengthier rallies – physical on-court battles ensued whilst those that were comfortable dictating from the baseline found winning points slightly easier (despite the slog).

Three courts were allocated for the one o’clock start by the host team which meant the first round would see the first two singles players (Bobby & Arthur) play their singles matches alongside the number two doubles pair (Xing & Monty). Arthur was quickest to settle in against his opposite man; he was able to find his rhythm early on and impose a positive game plan thus remaining in control. His impressive array of groundstrokes coupled with a consistent serving display resulted in him winning his singles rubber comfortably 6/1, 6/1. Our number two doubles pair (Xing & Monty) paired up for the first time together – they quickly settled in and communicated very well throughout the match. Their effective communication and calm composure resulted in them taking the doubles rubber after a solid display 6/4, 6/2 despite a degree of nervousness at the start of the match. Bobby on the other hand had a tough time against Shrewsbury’s number one player (and nationally ranked at 59) Jacob Rogers. Despite being physically smaller and younger than his counterpart, Bobby was often in control of rallies and made life very difficult for the highly-ranked Jacob. The match (despite the scoreline) was a lengthy encounter full of twists & turns and many nervy & tense moments where Bobby certainly had opportunities to change the scoreline on numerous occasions, but ultimately was let down by his serving and the occasional mistake at the net. It was an incredibly hard-fought display from Bobby who eventually lost albeit to a physically spent opponent 3/6, 3/6. Hopefully Bobby will get to play him again soon and turn that score around. The first round duly ended with North Oxford in the driving seat with a brace of rubbers to Shrewsbury’s single.

The second round went on immediately after Bobby’s lengthy match ended. Xing & Monty went on for their singles rubbers. At the number three position, Xing played against an older and physically bigger and stronger opponent. It was clear from the onset that he would have to sustain a barrage of aggressive forehands and would need to find a way to move his physically adept opposite man away from his comfort zone should he wish to have any chance of competing (which he was ultimately unable to do). Xing fought bravely but would have to concede that today he couldn’t compete at the level required against a stronger opponent and lost 3/6, 1/6.

Monty took to the court for his singles rubber with a renewed confidence after his last Premier League performance in Cardiff. It was clear that he had put in more time on court preparing for this event and was more “match ready” for the occasion. Monty was in fine form (especially with his serving) and prevailed 6/2, 6/0 with a solid display of consistency and controlled aggression from the baseline. A great match for him to win in what became a one-sided affair!. Finally, Bobby & Arthur took to centre stage against Shrewsbury’s top pair. They secured the first set 6/3 with a fantastic performance & effort, but, much like their previous Premier League match, they suffered a lull in concentration and their intensity dropped enough for their opponents to take charge and win the second set 3/6. This meant they had to play a third-set tie-break, and at 6-6 in the tie-break, an emotionally charged &  pressure-filled atmosphere led to an uncharacteristic mistake which spelt the begging of the end for our pair. The nail-biting drama concluded with Bobby & Arthur losing 6-10 in the tie-break.

This result meant that the match score was level at three rubbers apiece. League rules at this point determined that a “doubles, tie-break shoot-out” would need to be played to decide the outcome of the match. The doubles pair would have to consist of one player from position 1 or 2; combined with a second player from position 3 or 4. Our pair for the shoot-out was Bobby & Xing (they played against their opposite numbers (i.e. 1 & 3 from Shrewsbury respectively)). Unfortunately for us, our nerves started to show and at this point, the Shrewsbury pair had the wind in their sails. Despite out best efforts, Shrewsbury won 10-3.

After a long and hard fought occasion, I was sad to see our team lose in such a way (a sudden-death tie-break having been in the lead all the way until the last set). But, at the same time, I can be proud of each and every one of our players. They fought to their limit and gave their best – which is the most that can be asked of anyone. Each player will walk away from this occasion wiser and better from the experience and take with them positives to remember as well as areas to work on to build their games for the future. The team was once again exemplary both on and off the court and it was a pleasure for me to make the journey with them as their Captain. Unlucky this time team, and let’s look forwards and onwards to the next one!

Thanks for the match report Allan Cooper.