Last month’s Australian Open was a vintage one for British tennis. So often the last remaining British player in the final stages of a Grand Slam tournament, Andy Murray was joined at the semi final stage by Johanna Konta in the women’s singles.

Murray lost in the final, but his brother Jamie won the men’s doubles title and Gordon Reid claimed the wheelchair men’s singles.

When asked why he thought British tennis has seen this recent improvement, Andy Murray said some of the credit should go to the team spirit developed during Britain’s Davis Cup triumph over Belgium at the end of 2015.

That good feeling has made its way down to the club level, says North Oxford Lawn Tennis Club’s head coach Chris Hampton.

‘Whenever we get a good run from a British player, we see more people playing tennis at the club and more kids coming to lessons and holiday camps,’ he says.

‘I always say that Tim Henman kept me in a job for years, and Andy has come through since then and taken it to a different level. We have a strong future in the women’s game with Konta, Heather Watson, Laura Robson and upcoming players like Katie Swan.

‘We could easily see four female tennis players in the top 50 in a few years’ time and I think that will keep people interested in Wimbledon when Murray goes’.

But Chris, who won the LTA’s award for coach of the year in 2015, says Andy Murray’s ability isn’t the main thing he wants his students to learn from. ‘I think what Murray does off the court is the biggest lesson of all,’ he says.

‘His worth ethic is ridiculous and that is why he has done what he has done. That is something I hope our juniors will copy.’

Since Britain won the Davis Cup last November, there has been a lot of talk from the LTA and the media about building on the legacy of this historic achievement and Chris is keen to answer the call at North Oxford.

Since the New Year he has been running a Davis Cup-themed coaching programme, in which students of all levels have been learning the basics of tennis – often representing Britain or another Davis Cup country in fun matches at the end of the sessions.

He is holding tennis camps over Easter and during the summer for schoolchildren and places are still available on both.

‘When a British tennis player has a good run in a tournament, we tend to get more people coming to holiday camps so we expect a great atmosphere at this year’s camps,’ he says. 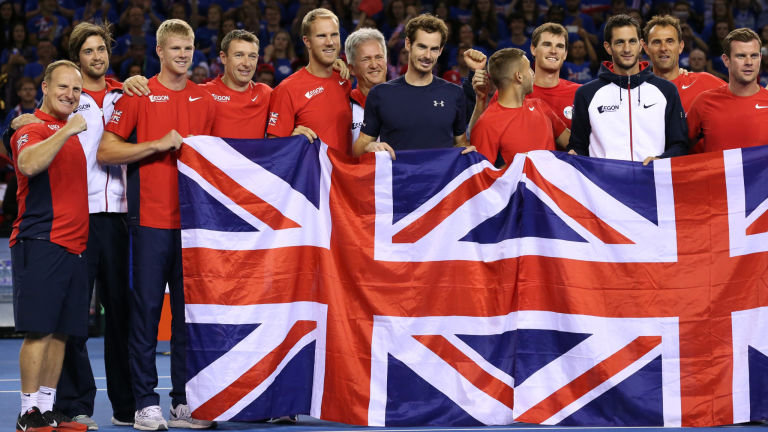