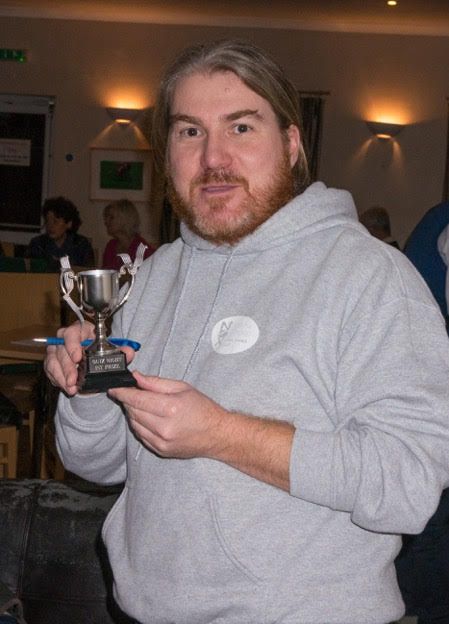 The latest in our series of profiles focuses on someone who works tirelessly behind-the-scenes to ensure that everything about the club looks professional, and that we have a positive brand and identity. As well as playing a whole lot of tennis, he also gives our brain cells a workout a couple of times a year

I started playing tennis when I was about 11 or 12 and joined my first club (Peppard near Reading, where I am from) when I was about 18. I played league men’s doubles until I went to university in the early 90’s. I was also briefly a member of Shinfield tennis club, near Reading, a club that actually had some grass courts – only 2 if I remember correctly, though. I did not play tennis for many years during my 20s – instead choosing to watch tennis live at Wimbledon and the other 3 Grand Slams. When I moved up to Oxford in 2004, a photographer I worked with showed me NOLTC in the Summer when the grass courts were open and I was smitten. I joined the club in 2005.

What have your roles at the club involved?

When I was a member of the Committee (2013 Feb 2013 – Sept 2017) I worked on a variety of branding and marketing projects at the club. I redesigned the club logo in 2013 and this was then used across our courts, club entrance, court numbers, website and on new hoodies and tennis shirts that were available to all members. We even had branded water bottles. I designed the Membership Handbook from 2013 and still work on membership renewal materials now. I helped reinstigate tennis ball recycling/ reuse by local schools at our club in 2014. In 2015 I worked alongside other committee members and Alberon Managing Director, and key club member, Tim Ault, on a new website for the club that was much more visual, making use of Nigel Francis’s brilliant photos.

Later I created bespoke clothing for the ATT and TT tennis teams,  when these high-level tennis teams were sponsored from 2016. End-of-court windbreaks were also sourced with the NOLTC and sponsor logos, creating a smart appearance for courts 4 and 5 (and court 3 with just the NOLTC logo). We even have branded parasols at the club!

Since 2013 I have helped run the twice yearly club quizzes (with the help of Jo and, of course, the great quizmaster himself, Jeff Hewitt).

Oh and lastly tennis. I have been a player in the singles boxes for over a decade at our club. I have played league tennis since Tom Stross scouted me for his team way back in 2005/2006. In more recent years I took over captaining both the Summer Mens E and, until a couple of years ago, the Mixed E team.

Probably my most memorable tennis achievements at NOLTC have been winning the league with Mike Thomas’s team back in 2011 and almost beating Alvaro in the singles boxes  – I got within 2 points of victory in the tiebreak once… I also set up a yearly Davis Cup-style tournament (the Baker-Smith Cup, it was called) against a club near Brighton. That was great fun and ran for several years. We even won once!

The amazing setting of the club, with those stunning grass courts and the great friendly members  – many of whom have become good friends over the years.

Who was your childhood sporting hero?

Boris Becker – Wimbledon 1985. I vaguely remember tennis before 1985 but Becker made me properly take notice and want to play the sport. He was so inspiring and I’ve been lucky enough to see him play at Wimbledon (in 1995).

Like many I am a massive Shawshank Redemption Fan (and saw it at the time in the cinema). In addition I am also a big fan of the film Moon (which I recently saw again at the Barbican with a full orchestra playing the sublime soundtrack).

If you were a guest on Saturday Kitchen what would be your food heaven and food hell?

Last gig was DIIV (USA band) that I saw at the end of February before lockdown. I love live music and prior to lockdown I had just been to gigs in the USA and Germany.

Tennis-wise it was Robin Soderling (who famously beat Nadal at Roland Garros in 2009). Music-wise, Gaz Coombes (from the band Supergrass). Both were really nice friendly guys.

Right now, a return to normal after these strange and stressful times. One day league tennis, club nights and American tournaments will return – and oh how we have missed them all…I also would like to be injured less myself, and play a lot more tennis 🙂