So far our series of Committee profiles have focussed on long-standing club members, but the Committee also has some newer faces. It’s time to meet our new Membership Secretary 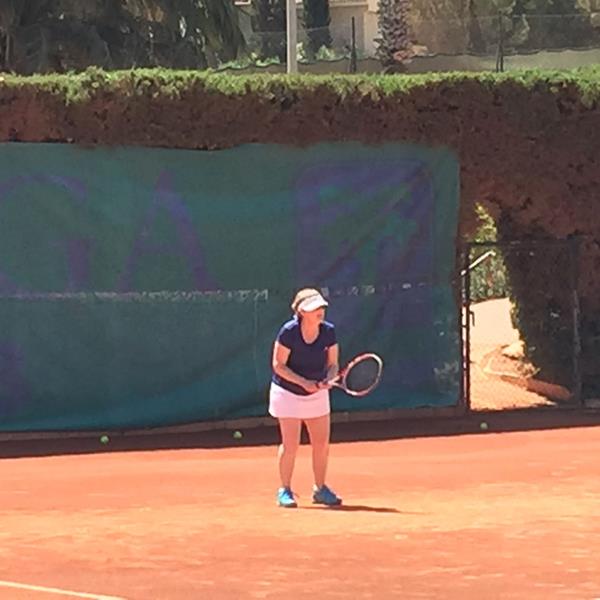 I didn’t start playing tennis until I was in my 40’s. The school I went to picked the six most sporty looking girls to train up for the tennis team and the rest of us were sent to play rounders, so I didn’t play tennis when I was a child which I much regret now.  About 15 years ago a tennis coach, who I knew as a parent at the primary school which my son went to, started running drop-in tennis sessions for women on Friday mornings at the tennis courts in my local park in Highbury, North London, where I lived, so I went along, and was hooked. A few years later I joined the newly-formed local tennis club, and played in the lowest Ladies’ team. I joined NOLTC two years ago, shortly after moving to Oxford, and started playing for the Ladies’ E/F team.

Having let it slip that I was Membership Secretary and also Captain of the Ladies’ E team at my former club, inevitably I was quickly roped in to take on these roles at NOLTC!  I have captained the Ladies’ F team for the last two winter seasons, and the Ladies’ E team (which is basically the same team) last summer. I have just taken over as Membership Secretary and am getting to grips with the membership renewal process, which is extra complicated this year because of the temporary club closure.

The best thing about NOLTC is that there is something for everyone, with lots of social and competitive tennis available. And I have met some really nice people, especially my fellow team members, which has been very important to me having recently moved here.

I’m still not sure whether “enjoy” is the right word (possibly “endure” might be more appropriate!), but I started running a few years ago – another sport that I left until far too late in life to start! I am a great fan of Park Run and am generally out running round Cutteslowe Park on Saturday mornings. Last year, I set myself the challenge of running in the Oxford half marathon, a challenge that was made considerably more difficult when I broke my left ankle on my first training run.  But I did take part and completed the course in under my (very slow!) target time, despite the appalling weather that day.

As a spectator, as well as enjoying watching tennis of course, I also enjoy watching football, and having lived in a house backing onto Highbury Stadium for many years, am naturally an Arsenal fan.

I don’t go to the cinema very often, but saw four films in matter of weeks just before coronavirus struck, of which I think the best was Parasite.

My husband is a much better cook than I am, and tends to do most of the cooking, so I am not sure that I have a signature dish. However, during lockdown, we have both been experimenting with different recipes, and I have been making a lot of cakes, something I never normally do. It’s good practice for making cakes for post-match teas.

Probably the last time I went to a gig was when my son played in a band when he was in the 6th form. Given that he was the drummer and he was too young to drive, I spent a fair amount of time driving him and his drum kit around to various bars and clubs in Camden and Hoxton and then watching them perform.

What bones have you broken?:

The only bone I have ever broken is my left ankle last summer which not only hampered my training for the half marathon but also meant I missed much of the summer tennis season. And currently I have a knee injury which means that I couldn’t play tennis even if the club were open, so my playing career at NOLTC appears to be jinxed. Any knee specialists out there?

I hope the club continues to be an inclusive and welcoming club.  And gets a decent coffee machine!