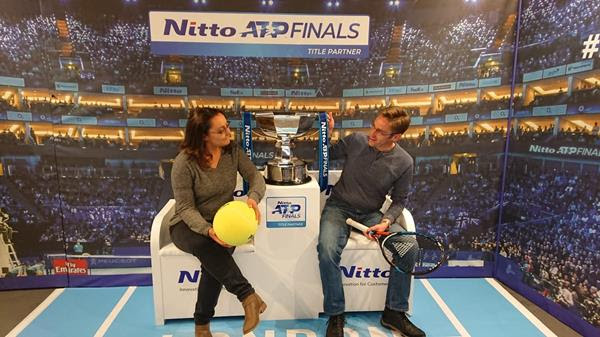 I was a late developer when it came to tennis,  I only starting playing about 10 years ago when friends from work asked me to make up a four one day. I have been addicted ever since, and have converted my partner, Luke, into becoming a tennis fan too.
Now I’m frequently seen at the club, and for my enthusiasm have recently started captaining the Mixed D team – a group of the loveliest people you could ever hope to play with and then enjoy a pint with in the bar after. We’ve been Zooming (new verb for lockdown) over the past 6-7 weeks, running quizzes and generally chatting about how much we miss tennis.

It’s a cliched answer, but NOLTC has a fantastic bunch of members. It’s inclusive, community-spirited and there really is something for everyone.

Rather foolishly, I signed up for the Blenheim Triathlon this year. It’s been moved back to September (if it goes ahead at all), but I’ve kept up the cycling in lockdown and have also taken up running. I’m not sure when I’ll be able to practice swimming again though.

Who would you choose to play yourself in the film of your life?

They’re making a film of my life? That’s awesome. I expect it’ll be a trilogy …
She’s way cooler than me, but I’d want Kathy Burke to play me on film. I have a habit of trying a little too hard sometimes, and would love to have more of her couldn’t-care-less attitude. #lifegoals

I don’t have one, but my family’s from Trinidad in the West Indies, and I’ve always had aspirations of cooking roti dahl like my grandma used to.

At the beginning of March I went to see an acoustic set by Turin Brakes at The Mill in Banbury, of all places. It’s the second time I’ve seen them live and was an ace last gig pre-lockdown. I’ve a feeling it’ll be a while before gigs & festivals are on the calendar again.

Through my work I had the pleasure of meeting Dame Ellen MacArthur at her foundation on the Isle of Wight. It was around the time of the 2012 Olympics and we were interviewing her for a film around the sustainability of the London Olympic Park. She was fantastic to talk to, totally without ego, a true social conscience and with a passion for the preservation of the planet. My kind of celebrity.

I love meeting members who have only just taken up tennis – be it a parent who picks up a racket while their kids play hockey, or someone looking to get active while meeting new people. NOLTC should continue to be inclusive and encouraging for anyone who wants to enjoy the sport, regardless of how long they’ve been playing or their skill level.