North Oxford Junior star Benedek Diiks had great success at the Grade 4 Witney tournament last weekend.  Benedek, who trains with the North Oxford Academy, won the 9u title.  He said this after the win:

“I felt really pleased after my win in the final.  The windy conditions made it really hard to play.  it was really hard to adapt.  I also had the challenge of having to come back in both my semi-final and final.”

Coming back from behind in the shorter tie-break format which the under 9s play, shows a great determination and never-give-up attitude.  We are all really pleased for Benedek and look forward to seeing him compete for the teams this summer at NOLTC.

At the other end of the age spectrum, our very own Tom Stross was presented with a prize from Tennis Oxfordshire (at their AGM) for being the oldest player playing in the Oxfordshire Leagues.  Tom is 88 years old and is the captain of our Men’s G team. 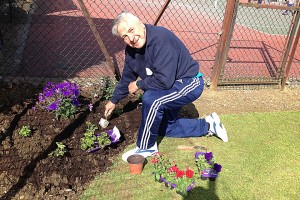 Tom is a regular at club mornings and charity events.